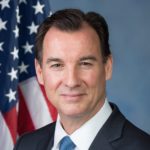 From The Desk Of Rep. Tom Suozzi

I’m passionate about solving our nation’s immigration crisis. Why, you ask? The answer is simple. My family’s story, like many families’ stories throughout New York and the country, did not start here in America.

My father was born in Italy and came here as a boy. He fought in World War II as a navigator on a B-24 and was awarded the Distinguished Flying Cross. After the war, he went to Harvard Law School on the GI Bill and went on to serve as the youngest judge in the history of New York State. I’m a first-generation American and thanks to my immigrant father, I can proudly say that our family lived the American Dream.

It wasn’t always rosy. When my father was 18-years-old in 1939, Italy under Mussolini was teaming up with Hitler. Despite the discrimination he faced, my father lived an American success story that would make him proclaim throughout his life, “what a country!”

My father’s story inspired me as a young mayor in 1994, despite the rancor in our community, to open the first “dayworker” work site on the east coast. The newcomers from Central and South America who had once gathered on street corners seeking work in my hometown of Glen Cove, today own businesses and homes and their children go to school with my children. Much like my father, they often proclaim “what a country!”

President Trump’s derogatory comments about El Salvador, Haiti and some African countries were divisive, demoralizing and un-presidential. These countries are impoverished and suffering from a host of problems. The United States has always been a beacon of hope to them and so many others. His comments diminished our status as that beacon.

I support securing our borders, but we must remember this crisis started as far back as the 1980s, when Salvadorans flooded over the borders as they tried to escape the death squads, gangs and abject poverty.

No Republican as far back as Reagan or any Democrat as far back as Clinton has adequately enforced our border security. Now 11 million undocumented immigrants are scattered throughout our country—some with roots planted in America more than 30 years ago. It’s time for all of us to come together, solve this problem now and in a way that is true to the promise of America.

There are three key elements surrounding the immigration debate: The millions of Deferred Action for Childhood Arrivals (DACA) and DREAMers who were brought here as children. Any deal must include provisions to protect DREAMers, period. The nearly 300,000 people living here under Temporary Protected Status because of natural disasters or armed conflict back in their home countries. Many Salvadorans, Haitians and other immigrants settled on Long Island following a series of cataclysmic events.

And the overarching debate of comprehensive immigration reform and a way forward for the 11 million presently undocumented immigrants while securing our borders to avoid a repeat of the past.

With all of these outstanding issues, it’s hardly shocking that so many people are confused over what’s really at stake. Most people would be surprised to know that members of Congress on both sides of the aisle working on bipartisan immigration reform.

Unfortunately, far right and anti-immigration factions have a tremendous influence on the Republican leadership. Speaker Paul Ryan refuses to hold a vote because he agreed that he would not, as part of his role as Speaker, unless he has a “majority of the majority.” There are many proposals that could pass the House right now, but insider politics forecloses it.

This is the greatest country on Earth. My dad knew that. He also knew that a central part of our greatness is serving as a beacon to the rest of the world for those “tired and poor yearning to breathe free.” Reclaim that mantle and we will truly make America great again.