The cars lined up on the streets of Lindenhurst. Hundreds of people pulled into a desolate Lindenhurst High School parking lot, with social distancing in full effect. The sun was shining bright on Saturday, April 25, as a special parade was set to begin.

This was not your normal parade, either.

Jax’s battle against leukemia is nearing completion. On Saturday morning, the six-year-old went through his last round of chemotherapy treatment. It’s time to celebrate. Seventeen minutes. Nonstop. All of the cars, motorcycles and firetrucks Jax could imagine. It was a dream come true.

For three and a half years, Jax was fighting for his life. As his mother, Melissa, wrote on Instagram, “I started that countdown at 1,184 days and looked at it every day, thinking how are we gonna do this? But you were brave far beyond your years.”

It’s the creation of moments like this that inspired Mike LaRocca of Copiague Harbor to create Strong Island Car Parades 4 Kids. This group of volunteers is bringing parties and celebrations to the front yards of children stuck at home and unable to celebrate key life moments like Jax and many others.

“He had no clue,” LaRocca said. “He thought he was going to have a small family get together with his close family. Next thing you know, there’s a whole parade.”

Strong Island Car Parades 4 Kids started in late March when LaRocca’s friend asked him to come by for his son’s birthday. Next thing he knew, there were 150 cars circling around the block. It turns out this was the child’s fifth year of being cancer-free.

LaRocca’s custom-made bright green 2016 Dodge Viper, which he designed with Dodge and the SRT crew, often heads the parades. It has plenty of options, and it’s the perfect way to get these parades going.

“We had fire trucks, garbage trucks, FedEx trucks, racecars, you name it and they showed up,” he said. “I had about 15 to 20 messages in my inbox asking how does it work and how they can get one [a parade].”

From there, LaRocca started a Facebook group and Instagram page, @sicp4k. The Instagram page has several hundred followers, but the greatest impact has been on Facebook. The Strong Island Car Parades 4 Kids Facebook group has more than 4,000 members already, with people from across Long Island, Westchester, Brooklyn and even New Jersey asking strangers to come together for special moments.

“It is something that’s controllable when there’s nothing right now that’s controllable,” LaRocca said. “When you see the kids’ faces, it might seem like it’s just us driving up a block. But to them, it’s the world. They lose it.”

Currently, the volunteers are doing about 10 parades a day, exceeding the 300 mark overall last week. Dozens of cars have been coming together to make sure these kids don’t celebrate their birthdays or other milestones by themselves.

“It’s reassuring to know that people are good,” LaRocca said. “There’s one guy who drives from Port Jeff Station almost every day to drive around for kids. People love it. They don’t ask for anything.” 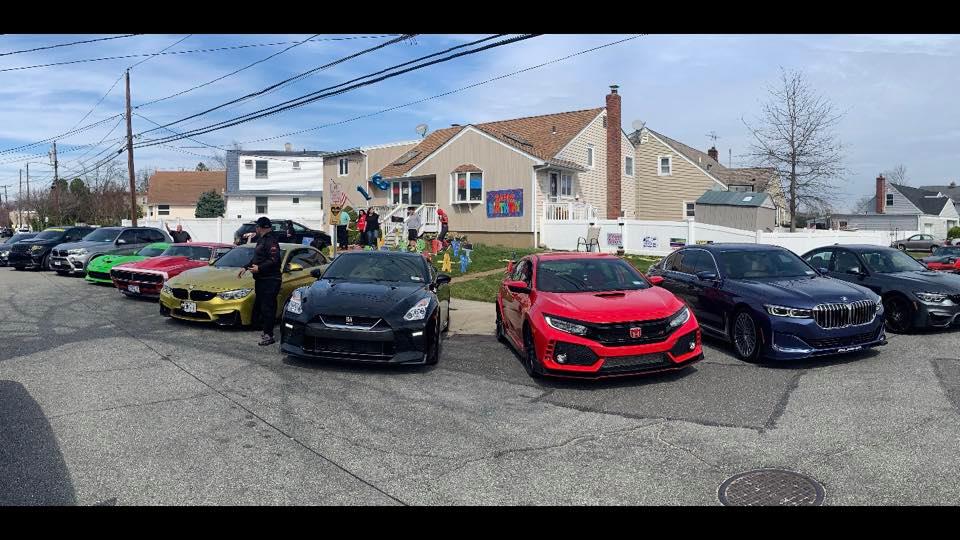 The group, thanks to plenty of donations across the island, has been giving gifts to all of the kids who they are visiting, all while remaining socially distant. The smiles on the kids’ face is worth it.

“Whether it’s a cancer survivor, a birthday or even someone who’s out of work, we have kids getting 10 to 12 gifts,” he said.

While Strong Island Car Parades 4 Kids won’t last forever, the goal is to make kids smile until things return to normal. While the coronavirus pandemic has limited social gatherings, this is one group of strangers who are coming together to make sure there is some positivity in the world.

“It’s sad that the life span is limited, but there’s a whole lot of good people and good friends that are coming out of it,” LaRocca said.

For those who are interested in having a car parade organized for their children, message LaRocca and the rest of Strong Island Car Parades 4 Kids’ volunteers on Instagram. Visit www.facebook.com/groups/sicp4k to join the group and comment on the date you want the parade to pass by your house. The only thing you need to do is put the child’s name, address and if there’s a specific reason to have the parade, write it down.

And yes, Strong Island Car Parades 4 Kids will even come on down for your wedding.